Here, the cranes can be tested with all their functions and in all axes including load and overload travel movements in the factory. This provides production reliability and shortens assembly and commissioning times at the customer's location.

Charged with specifically suitable test weights, function, behaviour and deformation can be tested at maximum load and overload, under real-life conditions. A carrying capacity of up to 30 tons peak can be tested and approved.

When used for the first time, the crane is already operated in all three axes. Here, the test stand benefits from its variable structure, allowing spans between three and 30 metres. The crane runway length of 15 metres is sufficient to test functions such as pre shut off und final shut off.

Beside lifting and lowering the loads and moving them along the crane runway, it is also possible to check control and automation with the test stand.

Do the hoists really work synchronously in tandem operation?

Are acceleration and deceleration of bridge and trolley correctly regulated by the load pendulum control?

If not, ALTMANN can access the control via WiFi and readjust. Further interfaces for accessing the PLC are available as well. It is also possible to create and run through cycles or step sequences "live". To this end, the test stand is equipped with a positioning system alongside the crane runway.

For eight months now, the test stand has been operated at ALTMANN and it has already checked a number of cranes for flawless functioning and automation before delivery. Thus, the ALTMANN team leaves nothing to chance and enables customers a fast and smooth commissioning process. This is a particular quality characteristic that distinguishes the ALTMANN Standard. 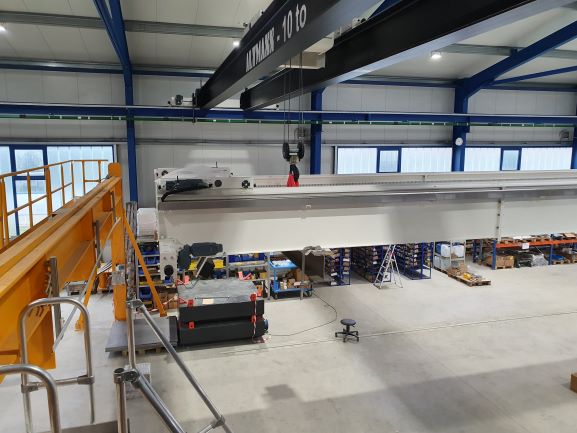