30 percent of the participants had traveled from abroad, and so planners, managing directors and sales staff from France, Great Britain and Holland also visited the Altmann trade fair stand. "For me, these international contacts were a highlight of our trade show appearance," says Managing Director Robert Altmann, adding, "The talks with a company from France sounded promising because there are no comparable suppliers of cleanroom cranes there. We also got into talks with company representatives from England, although there are of course still many imponderables here with regard to customs regulations and delivery to Great Britain, should an order come about here."

It proved to be advantageous that Altmann Fördertechnik was the only crane supplier present at Cleanzone. In addition to existing customers, the booth also attracted many curious trade show visitors who did not yet have a solution in use themselves or did not even know that special cleanroom cranes existed.

New for many: How the load floats into the cleanroom

Those who transport their material into the cleanroom without a cleanroom crane resort to trolleys, or the employees have to tackle it by hand. Visitors had the managing directors explain to them how loads can be transported via rails through an airlock from the anteroom to the cleanroom and how heavy machine parts land with pinpoint accuracy at the desired assembly or production location.

While customers from the pharmaceutical or semiconductor industries already came to the booth with clear requirements and talked to Robert and Achim Altmann about the requirements according to ISO 5 and ISO 6, others took the opportunity to take a closer look at the model of the cleanroom hoist mounted on a frame. This was the best way to explain how vibration-free transport works and what advantages the semi-automatic crane offers.

Since 2012, the Cleanzone Award has been presented to projects and products with an innovative character or efficiency gain in the cleanroom industry. This year, the cleanroom crane with semi-automatic and pendulum damping was among the five products nominated for the Cleanzone Award. The product convinced the jury with its motto "Innovation through recombination"; they praised the highly specialized product "which has not yet been included in a Cleanzone Award of this kind." The award ceremony took place on November 24 and Achim Altmann accepted the certificate as a representative of the company. The award was given to the company Reinraum-Mieten for its temporary, individually configurable cleanrooms.

According to the survey conducted by the trade fair organizers, 91% of the visitors:inside were satisfied overall with Cleanzone 2022 (2019: 85%). This can also be confirmed by the Altmann team, who have high praise for the trade fair organizers. Marketing manager Sabine Altmann is very satisfied: "Everything worked out wonderfully - both the construction of the stand and all the 'trappings'. We were pleased to hold discussions with numerous customers and also used our first trade fair appearance at Cleanzone to exchange ideas with other exhibitors. We are very optimistic that we will be there again in just under two years."

Fig.1: The Altmann booth with the model of a cleanroom hoist in the foreground, which met with lively interest. 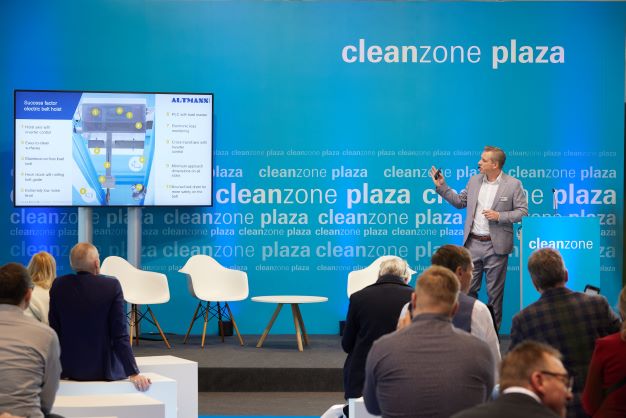 Fig.2: Achim Altmann presents the cleanroom crane with pendulum damping and its advantages. 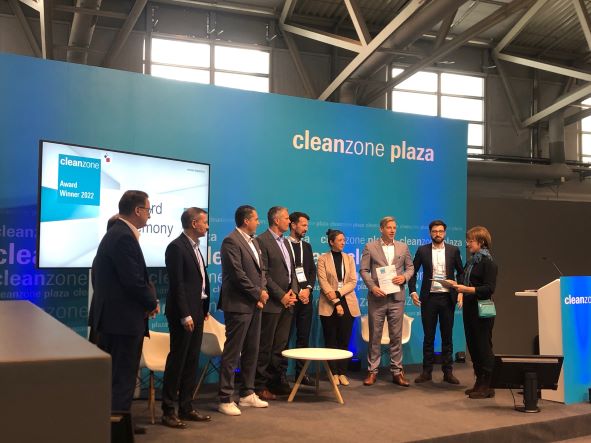 Fig. 3: Presentation of the Cleanzone Award: Trade show organizer Anja Diete presents the nominees with their certificates. Achim Altmann (3rd from right), Managing Director of Altmann Fördertechnik, accepted the certificate. The winner was reinraum mieten with a transportable cleanroom tent.

Fig. 4: There were 105 % more visitors at the anniversary Cleanzone than ten years ago, almost a third of them from abroad. As a newcomer to the trade fair, the Altmann trade fair team was pleased to welcome customers and interested parties and to hold discussions with planners and hall builders from Germany, England, France and the Netherlands.
Graphic: Messe Frankfurt