Of course, the welcome was a rather sober affair compared to the last two years. Due to social distancing rules, the guests were waiting in a queue to enter their contact details in the guest list and to apply the disinfectant provided at the entrance. However, even the compulsory masks at the buffet and the widely spaced table rows did not prevent the employees and their families from getting into a good mood for the party by starting with coffee and cake. Celebrating in Corona times – there is always a solution, as ALTMANN showed despite the distance and hygiene regulations currently in force.

This time, the reason for celebrating was particularly important because ALTMANN looks back on a quarter of a century of corporate existence. After having welcomed their guests, Robert and Achim Altmann took them on a virtual trip back in time, starting on September 1st,1995.

Equipped with three desks, a typewriter, a 386 computer and a dot matrix printer, Robert Altmann started together with his parents Josef and Irmgard. From the beginning, there was this pioneering spirit which still characterizes today's projects. Thanks to his father's contacts, motivation, perseverance and a relentless will to win, the small team preferably faced challenges which others could not do. With the attitude "There is always a solution" it was not only possible to implement extraordinary projects such as the sliding wall at the Bundeswehr Memorial or the movable roofs of the 12 mosques in Mecca and to make their mark for Special Constructions over the years. With this motto, ALTMANN has always been ahead of others and has set completely new standards in the crane construction sector with its hoists and crane solutions. And this has not changed to date – except that the team has grown to more than 40 employees in the meantime. The production site and the equipment have been extended, too. From the former 12x12 m production area in Dieberg 12 to the 11,000 m2 large area in Oberdieberg 23-25, from the first 99 DM welding machine and the first CNC Internet bargain to the Royal Bavarian Hoist and a state-of-the-art Training Workshop – the development of the ALTMANN company did not only amaze the young and new employees. Even those who have been part of the team for a longer time, remembered with a smile those orders when Robert and Achim provided pleasant moments with their funny anecdotes during a presentation. At the end of the exciting and entertaining retrospective, the two hosts thanked their employees and the families for their hard work, their reliability, their motivation and their understanding. Without all this, the ALTMANN company would not have managed to become a specialist for Automatic Crane Systems and the market leader in Clean Room Technology, while having started with a three-men business.

A special honour was granted to four of the employees at the end: This year, Markus Huenges, Andreas Adolf, Tobias Tauchmann and Markus Krude have successfully finished their apprenticeships as specialist for lathe and mill cutting, mechatronics technician and industrial electrician. Apart from the well-deserved applause, they were handed over a present. The four continue to work in the company, not only because of the "basket filled with delicacies" but also because there is a good working atmosphere characterized by Josef Altmann's philosophy that everybody appreciates: "Do not claim anything from your employees that you would not be ready to do yourself!"

There was no excuse for Robert and Achim Altmann not to become part of one of the six bubble-soccer teams. Although one half-time lasted only five minutes, the players were sweating in their blown-up balls and the laugh muscles of the audience were extremely strained in this short time. During the short breaks when the bubbles were disinfected for the next teams, the children were happy to have another activity in their entertainment programme: soccer. As usual, the bouncy castle, the tent for creative crafting works supervised by J. Neuwieser, L. Liebmann and J. Venus and the countless child vehicles were very popular among the little ones. This time, however, the highlight was the mound left from the construction of the new hall.

After the sports activities, everybody could recover with a meal - the barbecue buffet was opened. The butchery Gassner pampered the guests with culinary delicacies from beef, pork and turkey as well as a wide choice of salads and vegetables. Robert Altmann again used the mealtime for saying thank you to all invited construction companies, among them Heilmann, Schlingmann, Mitterhofer, Trojak and Schwimmer. All of them have contributed to the ALTMANN success story with their solid construction performances.

The weather remained fine and the good mood persisted until the late evening hours, when the summer party ended around 11 p.m. and the Altmann brothers once again expressed their gratefulness with a small present to their employees' wives.

The Management - Speech at the 25th anniversary celebration 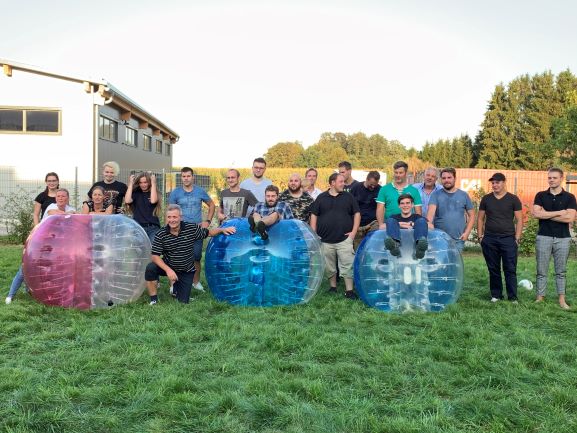 Markus Huenges, Andreas Adolf, Tobias Tauchmann and Markus Krude (absent for health reasons and not on the photo)